A big-hearted, sunny red from the hot dusty plains of La Mancha with blackberry fruit and a touch of spice. Great value too.

Spain lagged way behind the rest of Western Europe in embracing organic agriculture, so the brothers Parra (Francisco, Javier & Luis) could be said to have pioneered organic wine production in sun-blasted Castilla La Mancha, even though their work began in the 1990s. With 3 vineyard sites in the region and a winery ‘Cuesta Colora’ with a capacity of 2 million litres, they are major players in the arid land of Don Quixote.
Vineyard size 160 hectares. Organic since 1995. 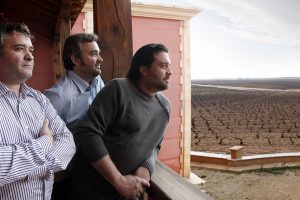 A big-hearted, sunny red from the hot dusty plains of La Mancha with blackberry fruit and a touch of spice. Great value too.

Be the first to review “Syrah ‘Parra’ DO, Parra Jimenez” Cancel reply